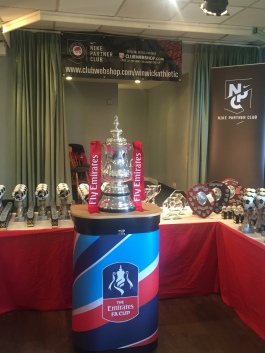 Hope you all have a great season.

Watch out for proposed Club Events too;

Your Committee are looking to put more on this season, plus if you would like to help or have some good ideas then please do contact us; thedoc1959@yahoo.co.uk

If you fancy testing out your fantasy managerial skills then why not take part in this (put together for Winwick Athletic FC) – so parents, coaches, supporters, friends and players, why not have a go …….

The League Code to enter is:    obucid

U9 Europa Cup – Woolston Rovers v Winwick Athletic Wolves 1.30pm at The Hive (No parking spaces available until after 1pm)

Event organised by Tom Shaw, a team-mate of Patric Wilson’s. This game will be held at 3pm on the Myddleton Lane pitches on Sunday 17th March 2019. Please come along to support and share the event to as many as possible.

The match was going to be lads v dads (£5 per player and all the money going to the charity decided by Patric’s family) but the proposed match has now been extended to be a select Players v Club Coaches/Managers including Dads. We want as many people there for the day as possible to support both teams. Then we can all go in the club for drinks and a raffle which will include prizes afterwards from 5pm to try and raise as much funds as possible.  Hope to see you all there ❤❤⚽⚽

Full details of the events in Winwick Leisure Centre after the match to be published as soon as finalised.

Further details will appear here in the next few days.

A match between Patric’s former team mates and Coaches / Committee from Winwick Athletic (Past and Present!) intend to fundraiser in Patric’s name by playing a special match 3pm and then hold a raffle afterwards from 5pm on St Patrick’s Day.

Get this one in your diary now ….. Annual Club Presentation is Saturday 15th June 2019 at Winwick Leisure Centre for every player in the Club to receive a Trophy from U6 Academy to U18s.